It was a banner year for Texas manufacturing in 2017, as the state recorded production levels not seen since before the recession.

Every month, the Federal Reserve Bank of Dallas surveys Texas manufacturing executives about market conditions. A key measure of the industry’s performance is the production index. Anything above zero means a majority of respondents saw growth, while anything below zero indicates respondents saw contraction.

In the graph below, see what the best and worst five months of the past five years were in terms of the production index. 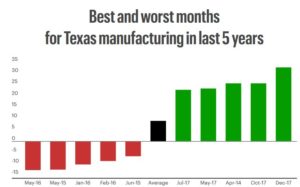 December was the exclamation point on a 2017 that saw an average production index of 19.5, the highest average since before the recession.

Here’s how 2017 compared with the last 13 years. The first full year the Dallas Fed compiled the manufacturing survey was 2005. 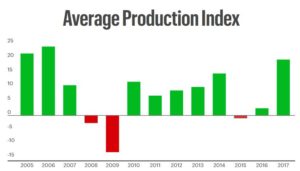