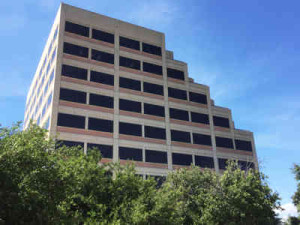 DALLAS – Aque Investment Group has selected Bradford Commercial Real Estate Services to lease the balance of its North Texas portfolio, the 149,416-sf Addison Tower in North Dallas. “We’ve won the new business based on our track record and leasing strategies in Arlington with Aque’s properties, where we’ve signed 22,400 sf of new deals since January,” says Ed Pachecano, senior vice president and managing partner of the Dallas-based full-service brokerage firm. He will be teaming with Richmond Collinsworth, vice president, and Clint Manning, associate. The Bradford team has been put in place in tandem with the landlord’s renovation of all common areas in the nine-story building at 16415 Addison Rd., including elevator lobbies, and construction of a 1,544-sf fitness center for its tenants. Also underway are some tenant realignments, resulting in two full floors of available space – the 13,841-sf penthouse and the fourth level, totaling 14,865 sf. “The Lower Tollway submarket is rebounding pretty nicely,” Pachecano says. “In this submarket, there’s not one other opportunity for a tenant in the 12,000- to 13,000-sf range to receive top-of-building signage in a class A office tower.” The property has direct access to Addison Airport, which is home to more than 700 based aircraft, an FAA control tower, 24-hour U.S. Customs service, more than 70 aircraft-related business on the field and on-site hospitality space. “Addison Tower’s gateway positioning at the airport is an incredible amenity. And, we definitely will be calling on companies that use the airport on a regular basis,” Pachecano says. The class A office building is 74% leased. The average floor plate is 14,865 sf. Amenities include a 432-space parking structure, 1,607-sf conference center, on-site security and balcony suites – and a location with easy freeway access and nearby restaurants and retail. Pachecano is counting on the “new norm” for office rates in the Tollway Corridor to work in Addison Tower’s favor. “We feel with so much new ownership along the Dallas North Tollway that tenants are being priced out. Addison Tower’s class A office space is priced below the new norm for rates in the submarket,” he says. Bradford has been leasing Aque’s Arlington properties in January – the 118,791-sf Copeland Tower at 1250 E. Copeland Rd. and 84,217-sf Stadium Place at 1200 E. Copeland Rd. Houston-based Aque self-manages its office portfolio, totaling nearly 1.2 million sf of multi-tenant space in San Antonio, Corpus Christi, Dallas/Fort Worth and its headquarters city.