ADDISON, Texas – With its fourth anniversary coming soon, Bitter Sisters Brewing Co. has inked a long-term renewal with Kennington Cos. to keep its production facility and tasting room firmly rooted in the heart of Addison. The craft brewery occupies 8,500 sf of warehouse space at 15103 Surveyor Blvd., of which 1,200 sf is a chic tasting room. The family-owned and operated business will mark its four-year milestone April 6. Brian Pafford, senior vice president and managing partner of Bradford Commercial Real Estate Services, and Susan Singer, executive vice president, were awarded Kennington Cos.’ 857,626-sf leasing assignment in the fall. The team negotiated the renewal directly with Bitter Sisters Brewing, keeping the 31,940-sf flex structure at 100% occupancy. It was one of seven recently signed leases for the 18-property flex portfolio. “Kennington is a family business just like many of its tenants,” Pafford says. “They take pride in doing what’s right and can understand the needs of small businesses.” 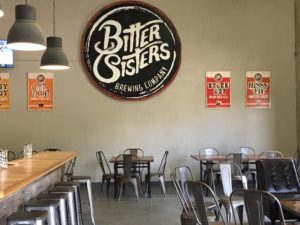 Kennington’s properties attract innovative and creative small businesses because of their sizes and locations. One of the landlord’s retail properties is home to Breaking Brew Meadery, the only mead tap room in North Texas. Surveyor Road is the craft brewery’s first and only location for making, selling and distributing its products. The property has direct access to Arapaho and Belt Line roads and is easily accessible to the Dallas North Tollway, Interstates 35 and 635 and TX 161. “Bitter Sisters is doing well at this location,” Pafford says. “It’s easy for the public to find and offers good freeway access for distribution purposes.” Bitter Sisters Brewery is open to the public Thursdays and Fridays from 4 p.m. to 9 p.m. and Saturdays from 11 a.m. to 9 p.m. for tours and tasting. It’s also available to rent for private parties and events. Ehinger has been brewing beer more than 20 years, starting while in college and turning his avocation into a vocation after 13 years in the corporate world as an engineer. Bitter Sisters Brewing is a family affair, headed up by Ehinger and his wife, Courtney.  At their side is the McHugh family, including parents, three sisters and their husbands and one brother.

Bitter Sisters Brewery’s seven types of beer can be found in restaurants all across Texas from “mom and pop” spots to fine dining establishments as well as specialty locations like major hotels, Whole Foods, Central Market, Total Wine and Spec’s. Brewmaster Matt Ehinger plans to release a new seasonal beer in the coming weeks at select locations to mark the brewery’s four-year anniversary.