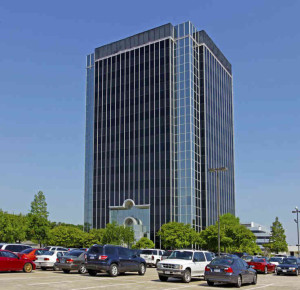 ARLINGTON, Texas — Publicly traded NorthStar Energy Services Inc. will relocate and expand to Copeland Tower in Arlington’s Entertainment District, signing a full-floor lease for class A office space with commanding views of the Dallas Cowboys’ home turf. Houston-based NorthStar, a Quanta Services Co. (NYSE: PWR), is the largest of three new tenants to sign direct deals for office space at 1250 E. Copeland Rd. NorthStar’s spot – 10,858 sf on the sixth floor of the 12-story tower – will be prominently marked by top-of-the-building signage visible from Interstate 30 and the 361,000 vehicles that pass the property each day. NorthStar will relocate July 1 from nearby Grand Prairie, gaining enough room to boost its local team to 40 professionals. Also July 1, Copeland Tower will welcome Lake of Dallas Inc., a structural engineering firm, and Los Angeles-based Apartment Service Management Co. Inc., which leased 1,458 sf and 1,534 sf, respectively. The Houston-based landlord, Aque Investment Group, was represented by the Bradford Commercial Real Estate Services’ team of Richmond Collinsworth, vice president; Erik E. Blais, market director; and Clint Manning, associate. The 126,602-sf office tower, abutting AT&T Stadium, is now 90% leased, up from 76% since Bradford’s brokers took over the assignment in January. NorthStar’s corporate officers finalized their long-term lease within four weeks of seeing first-hand the views from the only available full floor in the high-profile building. “It was a quick turnaround because the company is rapidly expanding and needed to be up and running quickly,” says Collinsworth, Bradford’s point man for the talks. “It was a good deal for the tenant, the landlord and the city.” Copeland Tower’s appeal is a combination of location and new renovations to the lobby and common areas by the landlord, who also manages the building. Turn-key offices have been selectively added to leverage market demand for immediate space. The largest contiguous block of available space is 5,738 sf on the fourth floor. Property amenities include an on-site bank with drive-through lanes and full-service deli. “The ownership and its on-site staff have the ability to respond quickly, which has helped us make our case to prospective tenants,” Manning says. Arlington’s positioning midway between Dallas and Fort Worth historically has been appealing, but leasing interest is soaring thanks to AT&T Stadium, new mixed-use developments and easy freeway access to the entire metroplex. “Arlington is on corporate radar screens now more so than ever. NorthStar is a well-known, publicly traded company with a strong background that toured Copeland Tower and looked no further,” Blais stresses. “That’s all the better.”