What are the Hardworking Cities in North Texas?

Home > In the News > Industry News > What are the Hardworking Cities in North Texas?

North Texas workers might deserve some time off. Six of the country’s 10 hardworking cities are in Dallas-Fort Worth, according to a recent ranking by industrial equipment supplier Kempler Industries. Plano ranks No. 2 in the country, behind Washington, D.C.

Dallas isn’t far behind in third. Grand Prairie, Garland, Irving, and Arlington all made the top 10 of hardworking cities. 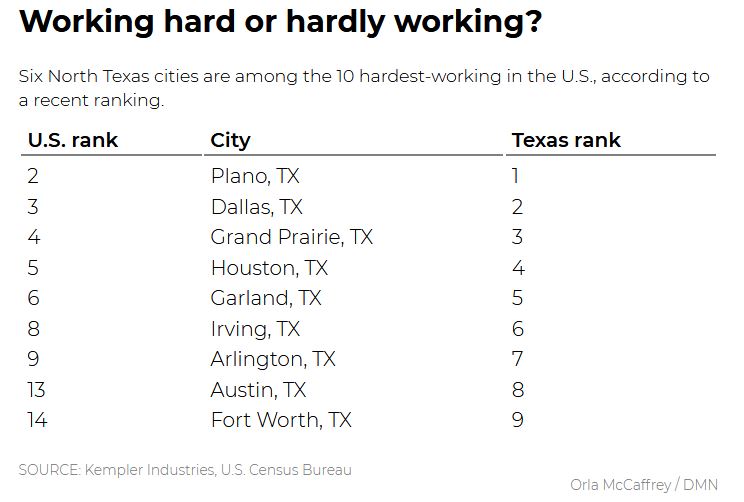 Kelle Marsalis, interim president and CEO of the Plano Chamber of Commerce, said she isn’t surprised by the high score. “Plano is an economic engine for our region,” Marsalis said. “Corporate campuses and small business both thrive in our community because of our affordability, job opportunities and stellar schools.” The ranking looked at 200 U.S. cities with populations over 150,000. Five metrics were derived from Census Bureau data to create a city’s score: average commute time, weekly hours worked, the share of workers under and over age 65 and percentage of unused vacation days. Plano’s high level of workers over the age of 65 boosted its ranking. More than a quarter of Plano seniors are still working, well above the U.S. average of 17.5%. And at least 22% of seniors in Garland, Dallas, Irving, and Grand Prairie are employed. 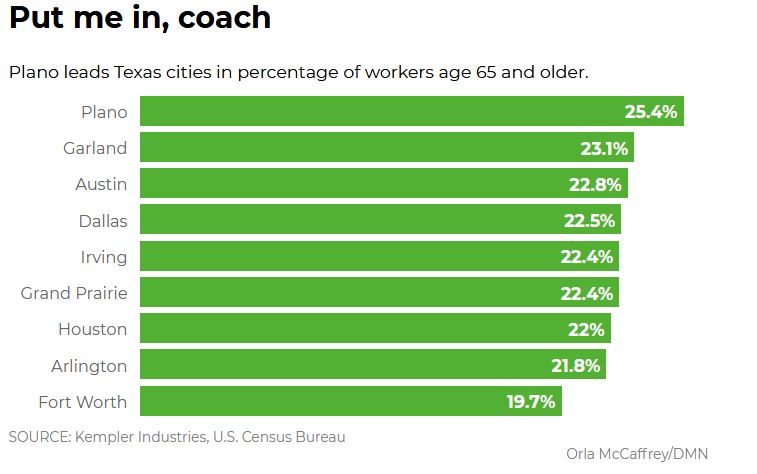 “We see individuals who have retired from one career only to pause a moment and pick up a new one,” said Michelle Madden, president, and CEO of the Grand Prairie Chamber of Commerce. Older workers staying on the job isn’t a new trend. The ratio of workers over 65 to the working-age population has been rising since 1998, according to the U.S. Bureau of Labor Statistics. By 2024, almost one in four workers will be 55 or older, according to BLS data. Close to 80% of U.S. job growth in the last 15 years has been among workers 55 and over. A historically tight labor market and lack of retirement savings are also keeping seniors in the workforce, said Bud Weinstein, an economist at Southern Methodist University. Golden-years employment might be pronounced in places where office workers make up a large share of the workforce, including Plano. “It’s much easier when you’re older to stay in labor force if you’re a knowledge worker than when you’re doing manual labor,” said Cheryl Abbot, regional economist at the Bureau of Labor Statistics’ Southwest office. Irving and Dallas’s residents clock the most hours in North Texas — just over 40 hours a week. Employees in Garland and Arlington averaged almost an hour less. But Grand Prairie and Garland residents can claim the longest average commute, 28.6 minutes. A similar ranking by WalletHub named Irving as the third hardworking cities in the U.S. Plano was close behind at No. 5. That analysis included more factors: share of workers with more than one job, employment rate and households where no adults work. Article by – Dallas Morning News