Home > In the News > Industry News > Industrial CRE Market Study: The New Retail
The continued proliferation of e-commerce and the demand for rapid delivery is one factor bulwarking industrial real estate’s continued boom. Stare out a street-side window for a few minutes and you don’t have to wait long to see a truck from FedEx, UPS, the U.S. Postal Service or some local delivery service scoot on by shuttling brown boxes to seemingly every address on the block. Delivery of all kinds of goods has become ubiquitous and only keeps growing, especially with so many boutique firms offering subscriptions to regular-use products like razor blades, electric toothbrush heads, pet food, meal delivery kits and countless other items. And then, of course, there’s Amazon and it’s daily deluge. It’s this activity that’s helping drive the fortunes of the U.S. industrial real estate sector. And the findings in our fifth annual study of the sector show there’s little expectation for the tide to turn. Fundamentals in 2018 improved across the board. And while there was some weakening in the bullishness among our readers compared to last year’s study, the overall sentiment remains very optimistic. For the second straight year, we asked readers how much longer they think the expansion cycle will last for the industrial sector. Sentiment is somewhat less bullish than it was a year ago. In this year’s survey, 44 percent of respondents said the sector’s expansion phase has at least 12 more months. A year ago, 66 percent of respondents felt that way. In the current survey, 33 percent said it will last 12 to 24 months (down from 43 percent a year ago), while another 11 percent said it would last more than two years (compared with 23 percent last year). 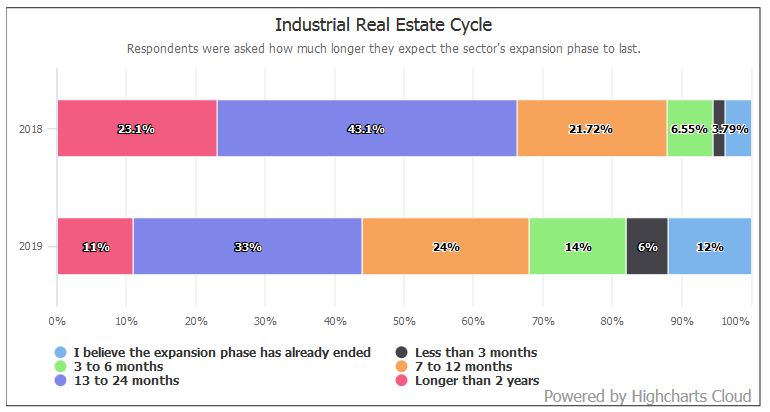 In fact, 12 percent of respondents said they believe the expansion phase is already over (up from 4 percent last year). And 44 percent indicated it would end sometime in the next 12 months (up from about 30 percent of respondents in our 2018 research). On the cautious side, one respondent wrote in, “I think the economy is starting to enter a slowdown, and once some of the young exciting companies don’t pan out, it will cause a review of current real estate strategies, which were based or influenced by the continued expansion of the status quo.” Another, however, expressed reasons for remaining bullish. “Increases in e-commerce sales are not likely to slow, while consumer expectations are now for doorstep delivery within 24 hours of purchase,” the respondent wrote. “In addition, traditional retailers have continued to keep more inventory on hand and closer to the end consumer. Assuming these trends persist, we are likely still in the middle stages of building out the necessary infrastructure to continue to meet growing consumer demand and thus the industrial sector likely continues to expand (albeit at a much slower pace) even in the face of a minor recession.” For the third consecutive year, respondents estimated cap rates in their region to be 6.1 percent. That was after reporting declines in cap rates in both 2015 and 2016. In addition, more than half of respondents said they expect cap rates to rise in the next 12 months—a higher level of bearishness than respondents reported in 2018, but below the 58 percent that answered that way in the 2017 survey. 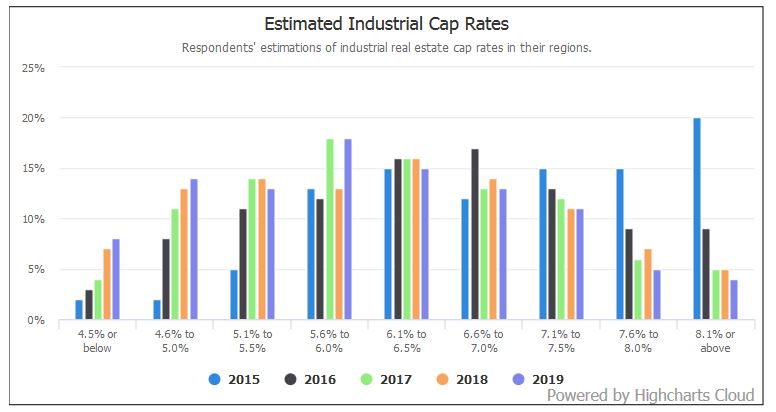 The amount of respondents saying cap rates would decrease further fell to 14 percent—the lowest figure in the five years we’ve been conducting the research. The remainder of respondents—35 percent—said they expected cap rates to remain flat in the next 12 months. 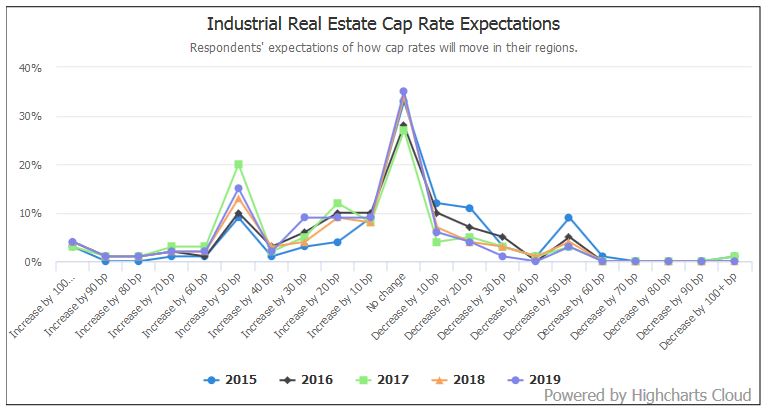 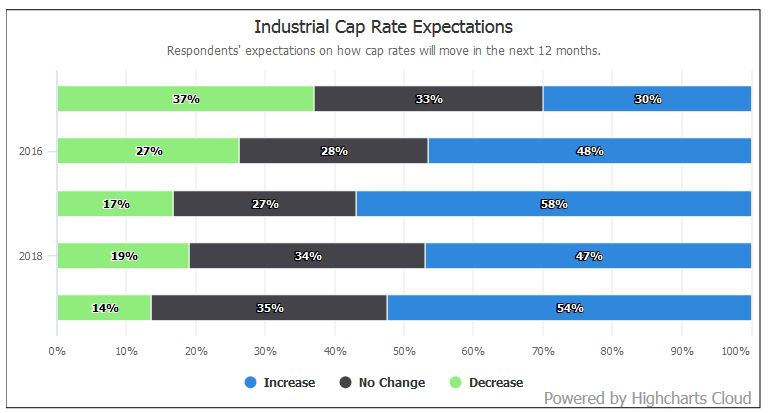 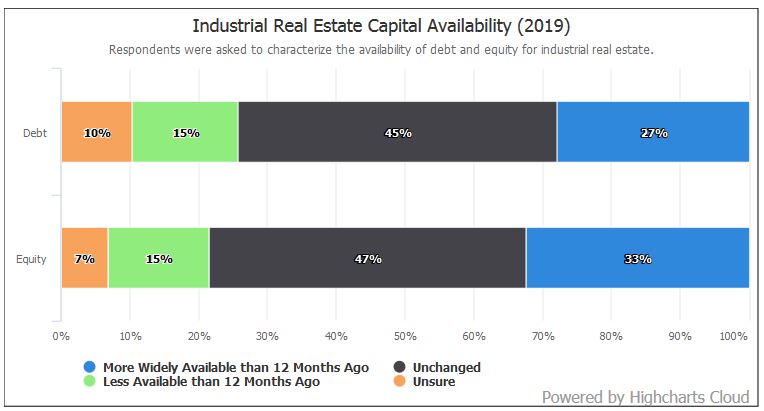 The picture was similar on the debt side, where 47 percent said it was unchanged (down slightly from 50 percent in 2018), 27 percent said it was widely available (down from 29 percent), 15 percent said it was less available (up from 10 percent) and 10 percent said they were unsure (in line with 2018’s 11 percent). Respondents were also asked how they expect lending factors to change in 2019. Nearly four-fifths (79 percent) expect further interest rate increases (up from 75 percent a year ago). And 37 percent also expect a rise in the risk premium (similar to last year’s 37 percent figure). For two other factors (loan-to-value ratios and debt service coverage ratios), a majority of respondents (roughly 66 percent for both) don’t expect to see changes. Those numbers were consistent with 2018’s sentiments. 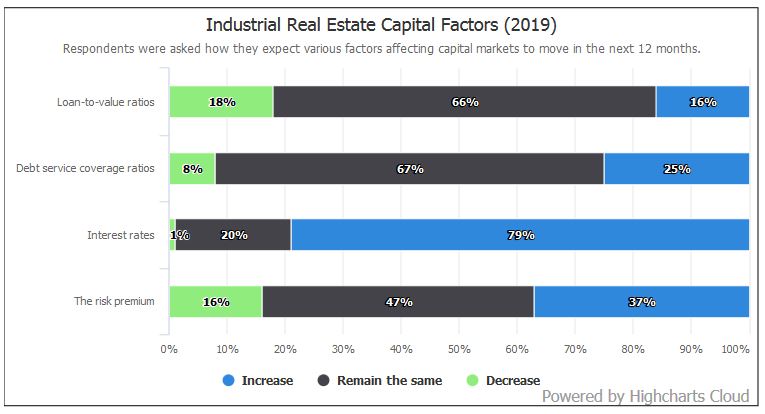 As that translates to investment activity, just less than half of respondents (47 percent) said they plan to hold industrial properties in the next 12 months (virtually unchanged from last year’s 48 percent). About 18 percent plan to sell (up four percentage points from 14 percent in 2018). In addition, 35 percent are looking to buy, down a hair from 38 percent in 2018. 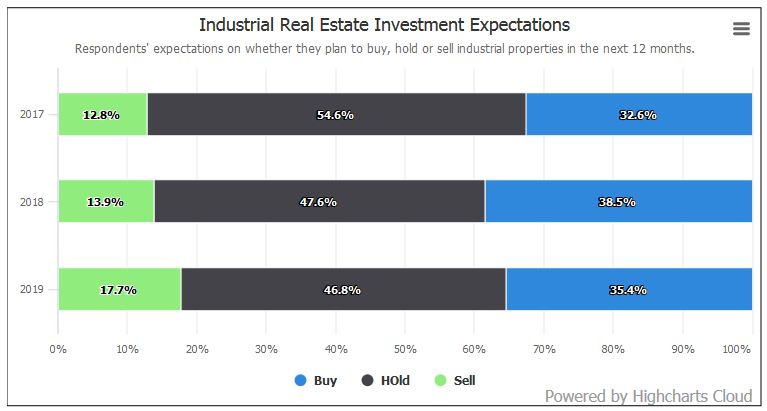 In assessing industrial real estate’s subsectors, a majority of respondents (60 percent) said warehouse/distribution facilities in traditional locations would be most in demand going forward. That was followed by “last mile” warehouses (48 percent) and flex industrial facilities (37 percent). Respondents were allowed to select more than one property type. The subsectors finished in the same order in 2018, but, notably, the figure for “last mile” facilities jumped 12 percentage points, while the figure for traditional locations dropped 4 percentage points. The flex figure was up from 32 percent in last year’s research. 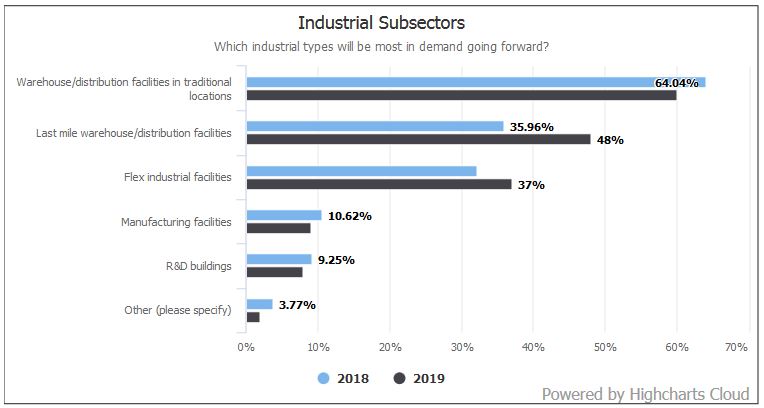 “As e-commerce continues to grow and the number of products available increases with customers demanding shorter delivery times, the proximity of facilities to the consumer will be increasingly important,” one respondent wrote in. Another agreed, “delivery for products (is) reaching an all-time high—there is a demand that needs to be filled. As that demand increases, so will the occupancy—and development—of the industrial assets that house them.” As has been the case with our four previous studies, there is almost no concern about overbuilding in the industrial sector. In all, 50 percent of respondents said the level of development is about right for the sector, which is similar to last year’s figure of 52 percent. Just more than one-quarter of respondents (27 percent) indicated there is too little development occurring (down slightly from 31 percent last year). Only 9 percent said too much development is taking place (up a hair from 7 percent in 2018), with the remaining respondents saying they are unsure. 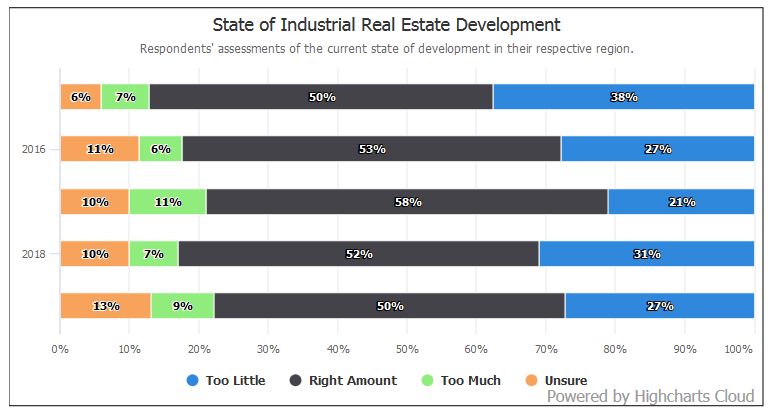 California’s Inland Empire market is currently experiencing the greatest amount of new development, according to the most recent data from JLL. The market currently has 28.4 million sq. ft. under construction. Other markets with robust pipelines include Dallas/Fort Worth (23.8 million sq. ft.), Eastern and Central Pennsylvania (19.0 million sq. ft.), Atlanta (18.4 million sq. ft.), Chicago (10.49 million sq. ft.) and Indianapolis (10.26 million sq. ft.) In evaluating demand, almost one-quarter of respondents say there is room for 25 percent or more of current inventory in additional absorption, a new high in the five years we’ve been conducting the survey. 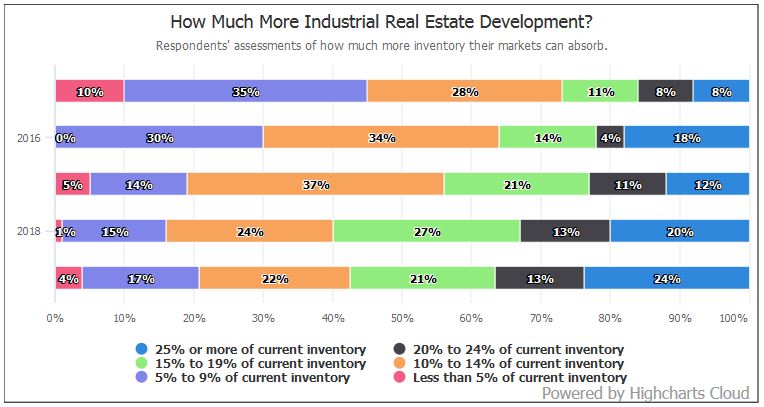 As in past years, we continued to gauge how the conversion of old industrial boxes into other uses is affecting industrial real estate fundamentals. Overall, 66 percent of respondents said that this activity is taking place in their markets. (The figure has hovered between 64 percent and 70 percent in all five years we’ve conducted the survey.) 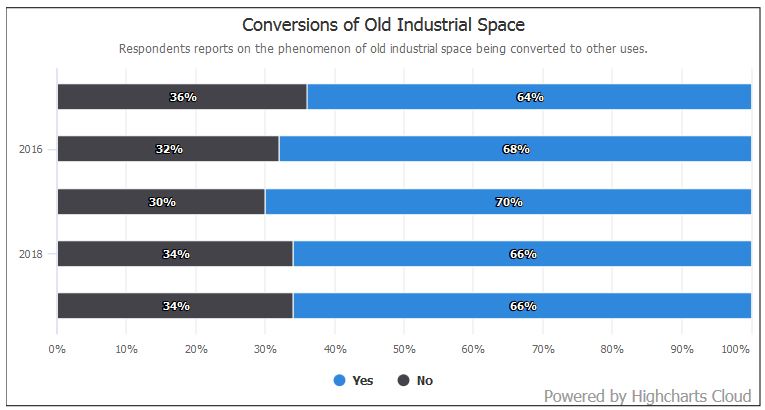 What has changed among respondents is the assessment of how this removal of space is affecting the broader market. Whereas a few years ago a majority of respondents thought this removal of inventory was leading to a net reduction of industrial space in their markets, in our current survey a majority think this removal is being either balanced by new construction (46 percent) or that the construction of new space is exceeding the amount being removed by conversions (23 percent.) Sentiment did notably shift on the occupancy rate front in our 2019 survey. For the first time in the five years conducting the research, a majority of respondents did not say occupancy rates would increase, although the outlook is far from bearish. 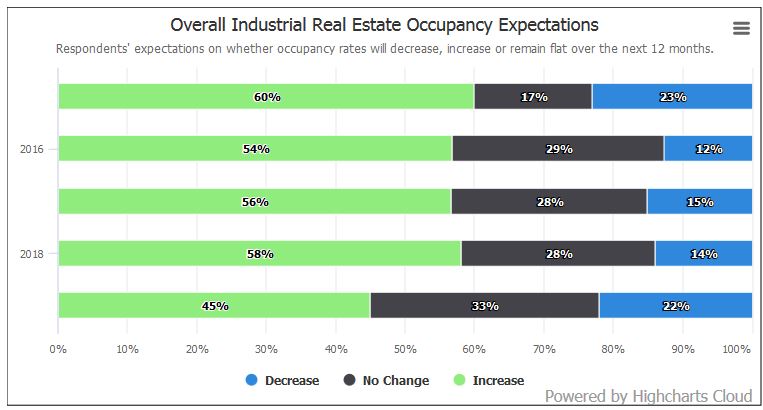 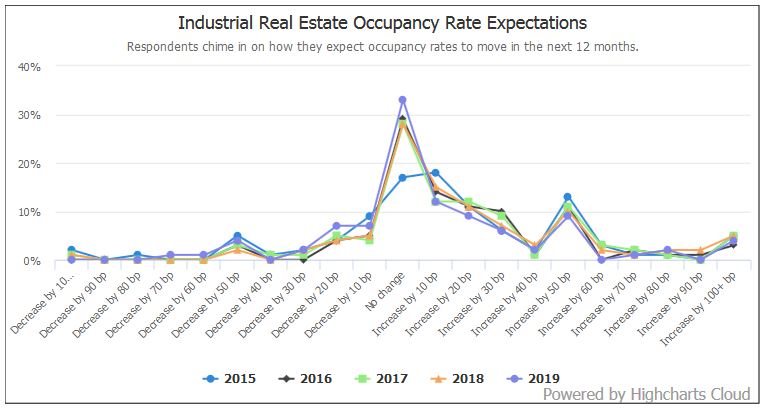 In 2018—at least the first half of the year—many of the largest leases signed were for third-party logistics (3PLs) providers for distribution of products to customers, according to a report from CBRE. An analysis of leases for 100 largest industrial and logistics (I&L) spaces by square footage, which together totaled 67.8 million sq. ft., showed that 56 of the leases were signed by 3PLs and e-commerce users. “This was the first time 3PLs were at the top of the list, a proof-in-point that people are outsourcing as much as possible,” Adam Mullen, CBRE Americas leader of industrial and logistics, told NREI in October. “The strength of leasing to 3PLs shows that companies are striving to create the most flexible and nimble distribution networks possible.” Southern California’s Inland Empire led U.S. metro areas for the largest share of big leases in the first half of 2018, with 14 transactions comprising 11.6 million sq. ft., followed by Atlanta with 10 deals for 7 million sq. ft. Additionally, Chicago had 11 deals, with a total of 6.8 million sq. ft. leased, Pennsylvania’s I-78/I-81 corridor reported 10 deals for 6.8 million sq. ft.; and Dallas-Fort Worth had eight new industrial leases with a total of 5.2 million sq. ft. The outlook for sector rents remained consistent with past years. 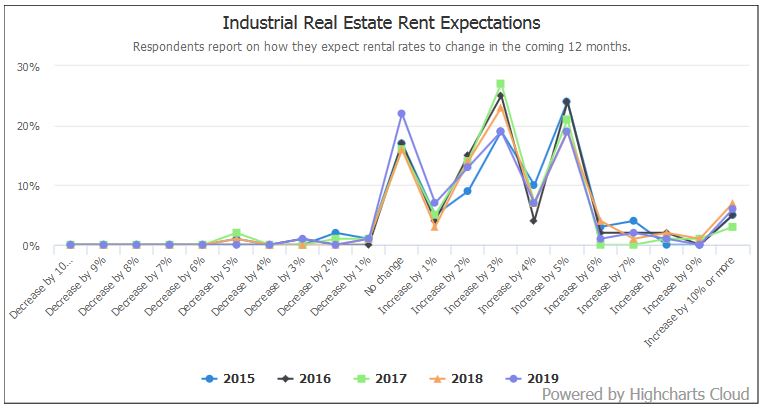 The majority of respondents (approximately 75 percent) said they expect rents to rise in their region in the next 12 months. (The figure has been around 80 percent in all four surveys, but this year’s figure was the lowest we’ve received so far.) But—as in 2018—only 2 percent said they think rents will decline. About 22 percent said they will remain flat—up from the 16 percent who answered that way in 2018. 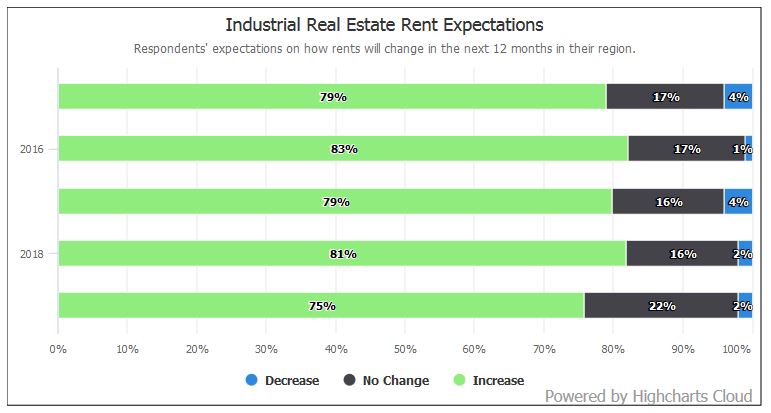 Indeed, in the third quarter of 2018, annual rental growth accelerated to 6.3 percent, according to data from JLL. That pace of growth exceeded the numbers posted in the first and second quarters. The firm reported rents for the sector averaged $5.74 per sq. ft. nationally. In addition, JLL reported the vacancy rate for the sector at 4.8 percent, an all-time low despite healthy construction volumes. 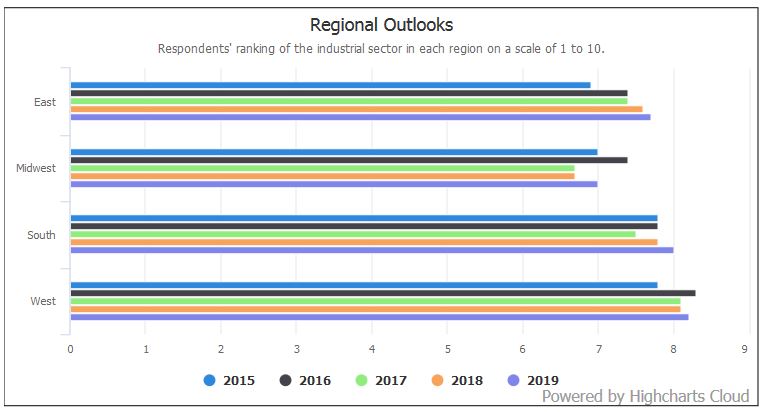 Respondents were asked to rank the relative strength of their regions. The results were similar to past years (on a scale of 1 to 10)—with the West (8.2) and the South (8.0) continuing to top the East (7.7) and Midwest (7.0). The numbers for all four regions rose between 10 and 30 basis points. Written by David Bodamer – January 24, 2019 National Real Estate Investory