Manufacturing is a Cornerstone of the Texas Economy 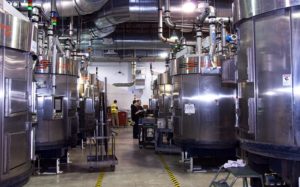 Manufacturing is a cornerstone of the Texas economy, employing more than 7% of Texans, paying high wages, and producing hundreds of billions in goods for export each year. These businesses also generate opportunities for a broad spectrum of other types of firms ranging from suppliers of needed inputs to those providing business services. In addition, as employees of all of these companies spend their payroll dollars, further economic benefits ensue. All in all, the multiplier (or “ripple”) effects of goods-producing business operations greatly magnify their importance to the state economy. In fact, according to an impact assessment by my firm, The Perryman Group, a typical manufacturing job leads to 3.778 additional jobs in the state, with some sectors (such as refining which uses Texas oil) bringing much higher benefits. Viewed in this manner, manufacturing accounts for about 30% of Texas employment and an even larger proportion of gross product. Over the past year, about 37,200 net new jobs were added in Texas manufacturing businesses, according to data maintained by the US Bureau of Labor Statistics (BLS) for the September 2016 to September 2017 time frame. That’s about one of every seven new positions added in the state over the period (which saw an increase in total employment of 256,100). In addition, the Texas gain accounted for almost 40% of the total US expansion in manufacturing employment over the period. No other state came close to the Texas expansion in terms of the jobs number, with the next-largest increase in Wisconsin (up 12,600). In terms of the rate of growth, Texas was also fastest at 4.4%, with the pace of growth in South Carolina coming in second at 4.1%. Many states lost thousands of manufacturing jobs (such as New York, which was down by 17,700 and California, which lost about 3,000). One reason for the focus on goods-producing sectors is that manufacturing is known as a “basic” industry. From an economist’s perspective, this means that all or most of the industry’s products are exported, increasing income and prosperity by bringing in dollars from elsewhere. The underlying importance of a healthy base of such industries is clear, and many definitions of “basic” industry are as simple as ‘an industry important to a nation’s economy.’ In Texas, the mix of manufactured products is determined in part by geography and resources. Oil and natural gas, petrochemicals, and agricultural products, for instance, are produced here because of geology, climate, and available land. Other manufactured products, however, stem from the state’s strong base of research universities and the technologies and discoveries they spin off as well as the well-educated graduates they produce. Still other categories (such as automobile manufacturing) are here at least in part due to concerted efforts to bring them to Texas through proactive economic development and incentives at the state and local level as well as a favorable business climate. Of the $230.5 billion in 2015 direct gross product produced by Texas manufacturing industries, about $55.5 billion was chemicals, $44.5 billion was petroleum and coal products, $28.6 billion was computer and electronics products, and $19.7 billion was machinery. These industries tend to pay quite well, with average wages in key components ranging from about $84,000 in machinery manufacturing to $131,000 in petroleum and coal products manufacturing. The overall median wage across manufacturing industries in 2016 was nearly $74,000 per year. Texas manufactured products make their way into markets around the world. In 2016, exports from the state exceeded $210 billion, according to the US Census Bureau. Top products included petroleum products, aircraft engines and parts, computer-related products, and various chemicals, among others. Texas exports account for nearly 16% of the national total. Mexico is by far the most important trading partner, with nearly 40% of the Texas exports headed south across the border. Looking ahead, prospects are good for continued strength in Texas manufacturing industries. According to the Texas Manufacturing Outlook Survey performed by the Federal Reserve Bank of Dallas, the production index (a key measure of state manufacturing conditions), recently rose to its highest reading since April 2014 and the new orders index reached a 10-year high. The capacity utilization index also pushed to its highest level in a decade. With continued expansion in the economies around the world, we can expect to see ongoing growth in their need for products produced in Texas. Although the vast majority of jobs added in the future will be in services-producing industries, manufacturing firms will remain an important aspect of the overall business complex. With well-paying jobs and the ability to bring new money to the state through exports (whether international or to other parts of the United States), goods-producing sectors are crucial to long-term prosperity. Originally published by The Perryman Group  Click here for link Dr. M. Ray Perryman