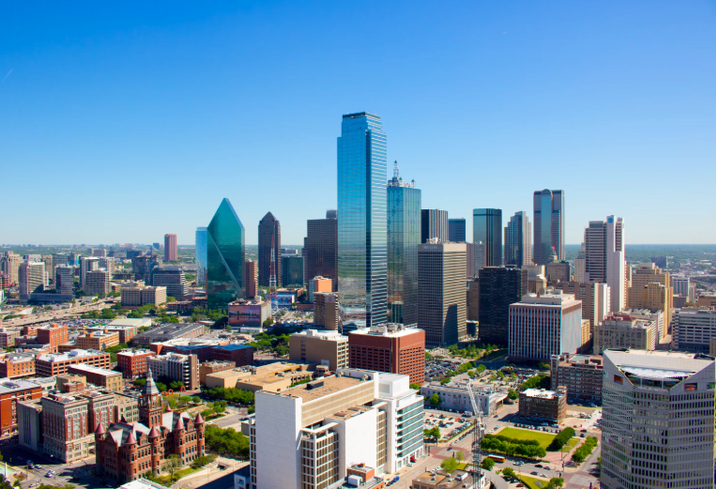 Companies relocating to the Dallas-Fort Worth Metroplex have their pick of cities to land in, but city officials say they aren’t fighting over these businesses — instead, they’re hunkering down, studying the data and figuring out what relocations are the best fit for their respective communities. The Federal Reserve Bank of Dallas reports 25,000 firms moved to Texas from 2000 to 2013, bringing 300,000 jobs. This Fed data may signify a competitive environment where cities are fighting over relocations to add to their tax rolls, but instead competition is giving way to a regional focus on synergy and a demand for the firms coming in to be the right fit for each community. In the past, many would have said city incentives drive relocating companies to one DFW city over another. But incentives are not the deciding factor, ESRP President of Site Selection Services Susan Arledge said. Everything from the availability of undeveloped land to the feel of the community plays a significant role in determining whether a DFW city lands a corporate giant, she said. The big deals either fall apart or come together on one thing only: the number of potential employees in the marketplace, Arledge said. “The companies’ job requirements are the No. 1 driver, so our clients give us the jobs in which they want to hire,” Arledge said. “It’s then our job to take a look at what’s the sustainability of those jobs. What is the supply like? Are those jobs available in these markets?” Job sustainability is a calculation of whether skilled workers will be available in the future, not just if they are there now, and companies look at it hard, along with the availability of millennial workers in particular. Arledge’s firm created a heat map that gives companies a closer look at where the largest concentration of Metroplex millennials live in DFW. The map shows clusters of young workers in Uptown, other parts of Dallas, Addison, Denton and scattered throughout. In this new corporate environment, where no one wants to live far from home, this map is one way for relocating firms to gauge the lifestyles preferred by the next generation of workers. “Millennials are very focused on locations that are close to where they live and don’t require a long commute,” Arledge said. “They seek a quality of life that minimizes commute time and provides amenities such as retail and restaurants near where they live and work.” DFW Cities Aren’t Necessarily Competing With Each Other, But They Aren’t Offering The Same Things Either DFW submarkets are already catering to millennials and building multifamily complexes, retail units and modern office complexes to attract companies with an interest in retaining employees for the life span of their careers. Well-known examples include Uptown’s ongoing development, the refurbishment of Deep Ellum, the creation of Legacy West in Plano and all the multifamily developments that have matriculated into Frisco to be near its entertainment venues. 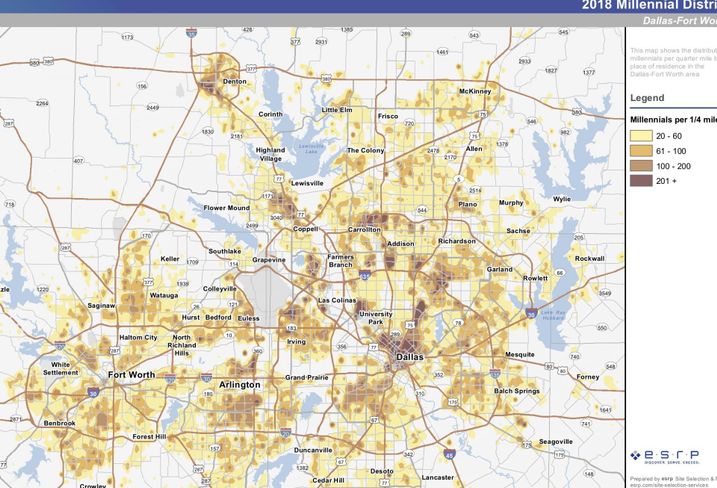 Frisco alone scored two major corporate relocations in the past year, announcing the Professional Golf Association’s impending headquarters move to the city and Keurig Dr Pepper’s relocation plans, which will take the company from Plano to Frisco. Such activity may convey the belief that DFW cities are now competing with each other for the top-dog corporations, but city leaders disagree. “I would say all of my neighboring mayors feel the same way that what is good for one city is good for all … the rising tide rises all ships,” Frisco Mayor Jeff Cheney told Bisnow. “We want to see Plano be successful, McKinney be successful, The Colony and others … we know that makes us more successful.” Cheney believes it is less about one area winning over the others, and more about what a company wants. Does it want to be near DFW Airport? Close to entertainment and sports venues? As far as Keurig Dr Pepper’s move goes, the company is moving into a city that possesses enough space for the build-out of a larger corporate headquarters — not to mention, all of the entertainment amenities nearby that complement the corporate brand. “I think they probably looked at The Star and the Dallas Cowboys,” Cheney said. “[The chance] to build a unique experience overlooking the practice field … I’m sure that played into the decision.” The availability of land and incentives also played a role in the beverage company’s move from one DFW suburb to another, Younger Partners Research Director Steve Triolet said. “From a labor and demographic perspective there is very little difference between Frisco and Plano. Business in most cases will make their decision between two similar-type communities based off upon the real estate projects that can accommodate them and also based upon the incentives the cities will give to sweeten the deal.” The incentive in the case of Keurig Dr Pepper? “ [Frisco sold] the land at a deeply discounted rate ($2.7M value for just under $600K) to help make the deal happen,” Triolet said. Sometimes it just comes down to where there is room. “Plano is more established and denser, but at this point has fewer land sites available for development,” Triolet said. “Frisco, on the other hand, is less dense, so it can accommodate more future growth, but currently has fewer existing amenities in place for most current locations.” Plano’s mayor agrees his city is lacking in the land needed for ground-up developments, but he said opportunities remain with existing buildings. “Plano is landlocked,” Mayor Harry LaRosiliere told Bisnow. “Going forward the biggest opportunities that exist in new office buildings is by repurposing existing structures. This can be challenging in the sense that sometimes you are trying to fit a square peg in a round hole by retrofitting, so the challenge often comes in the form of additional costs and zoning changes.” Adaptive reuse and redevelopment will also be how the area increases its amenities. The redevelopment of the Collin Creek Mall area, which sits just west of Interstate 75, may be just what the city needs to make a play for corporate relocations. “With a projected 1 million-plus SF of space, this project will provide us the chance to bring new employees and people to our downtown area,” LaRosiliere said. “The entire eastern corridor along U.S. 75 will benefit from this activity.” Fort Worth Is Also Jumping Into the Corporate Relocation Game The Fort Worth Chamber of Commerce recently worked with NAI Robert Lynn to lure farm store retailer Mid-States Distributing Co. to the city. The Chamber saw a need to aggressively chase corporations and promote its 70,000 acres of developable land, 14M SF of downtown office space and a walkable downtown, among other amenities, Fort Worth Chamber Senior Vice President Chris Strayer said. “We’re being more proactive and aggressive in targeted markets, industries and in the site selection community, touting our workforce, available properties, logistics and transportation capabilities,” Strayer said. “A 2017 city of Fort Worth study pointed out that most Americans rank Fort Worth 48th largest city, when in fact we are the 15th largest. That is a perception we’re out to change.” Fort Worth already has 68 active projects in its pipeline with interested parties, including many companies of various sizes and from different industries. Much like how Frisco is attracting businesses through its sports center, Fort Worth’s pitches to companies are focusing on its more earthy down-home vibe and pedestrian-friendly downtown. Mid-States looked at Atlanta as another possible location, NAI Robert Lynn’s Colt Power said. But with incentives and the type of real estate options available in Fort Worth, the company decided on the city’s Mercantile Center. “Culturally, as I got to know the company, the Fort Worth culture is in perfect alignment with Mid-States,” Power said. “They are farm and ranch type of retailers and Fort Worth definitely caters to that as a community.”
Original Article written in Bisnow, click here for link